Now that all of Chronotopia‘s main characters are introduced, I’d like to talk a bit about the king but, more importantly, about the three dresses from the fairytale! 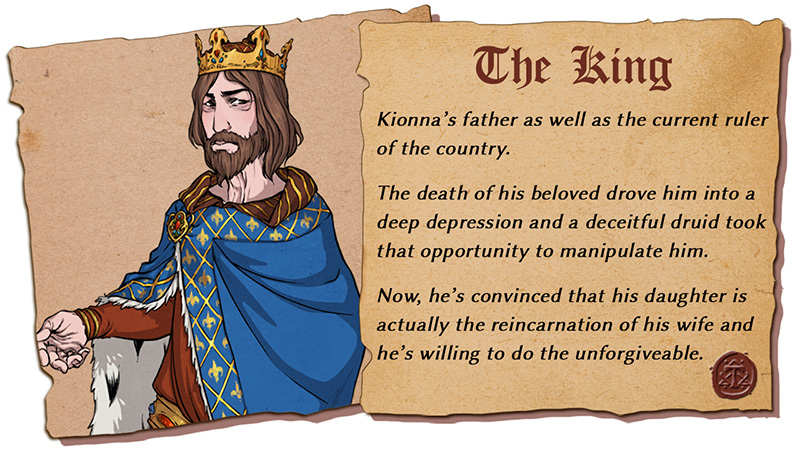 The king is not a character I’m fond of, as you might have noticed, so it was a bit difficult to figure him out. I tried to give him a more sympathetic side by making the whole incest issue the outcome of years of depression and manipulation at the hand of the druid that finally culminated into genuine madness. He used to be a good man under the influence of the queen, whom he loved dearly, but just lost his way after her death. There are even glimpse of self-awareness and doubt here and there. 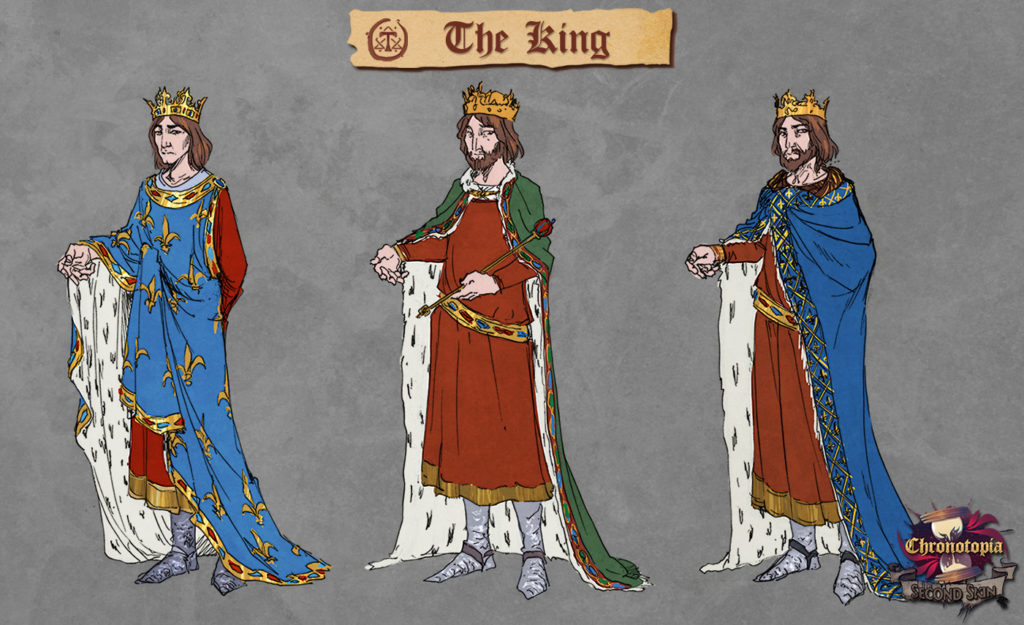 But in the end, what he did to Kionna (on top of all those years of neglect) was unforgivable and I didn’t want to make it seem like it wasn’t his fault or that he could be redeemed like he so easily is in the original. That’s why, unlike Perrault’s counterpart, the king here is just flat out framed as abusive: he threatens people -including his own daughter- just to get what he wants, make his servants work to death, doesn’t care about the well-being of his kingdom and even dooms it by killing the one thing keeping it afloat (aka the magical donkey). And because he’s so menacing and violent, it also rises the stakes to escape from him. Just goes to show to the reader that this man is in fact beyond salvation. 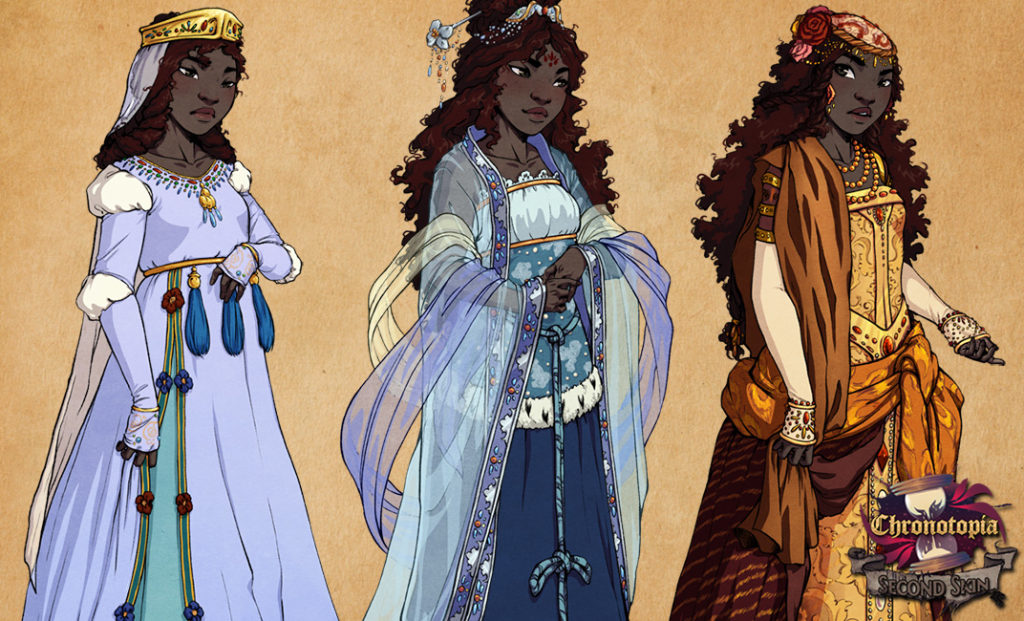 That’s when the magical dresses come to play! They are merely excuses made by the princess to gain time and avoid the dreaded wedding but the king does manage to provide them. Which gives her a perfect reason to have extraordinarily beautiful clothes. In the original Donkeyskin, the heroine brings the dresses with her in her exile and just wears them from time to time to feel like a princess again (and make the prince fall for her). In Chronotopia, this is also very much the case but they also embody Kionna’s vanity. After all, those dresses are cursed gifts from a mad father! 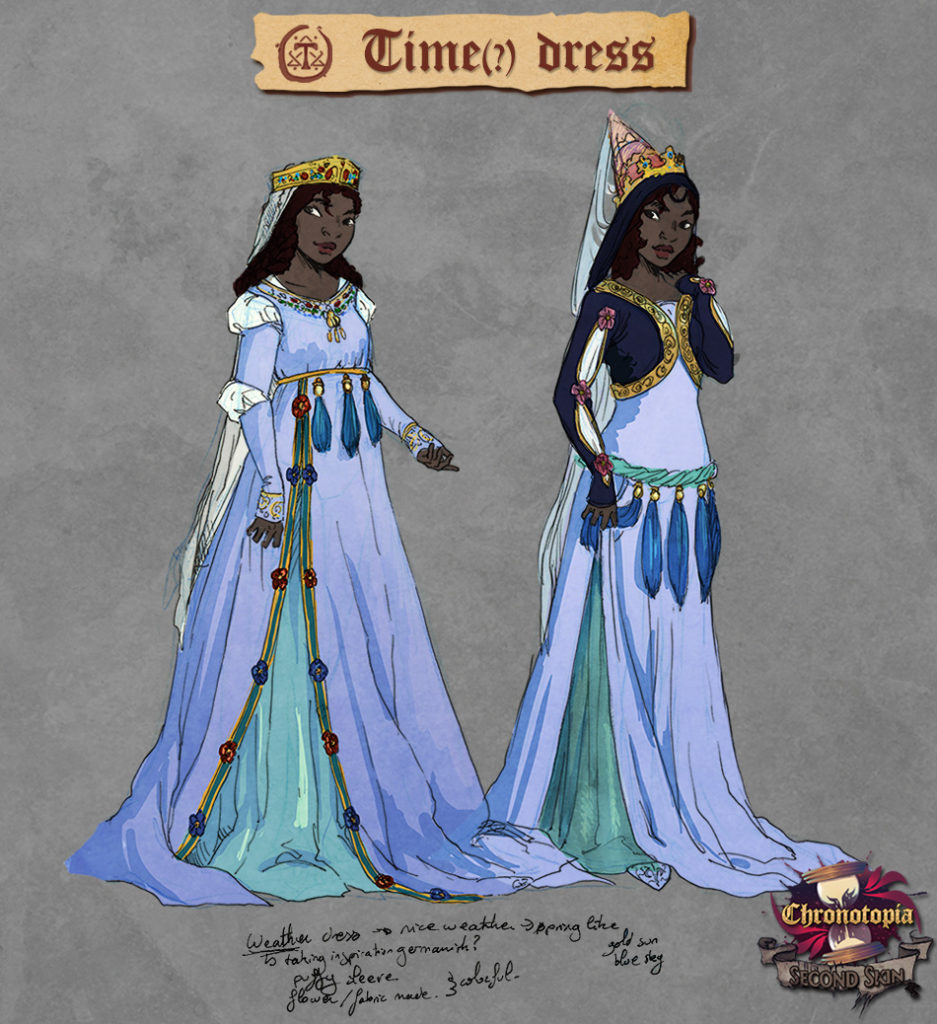 The discrepancy is right here between the title and the notes X).

Each dress portrays a theme and I should mention first that Anako did a stellar job at coming up with a vision for all of them! Sadly, the first one is also the result of a little disagreement. In Donkeyskin, the princess asks for a gown the color of weather, which basically means the sky. But I always found a blue dress a bit boring compared to the other two; it did not feel magical enough. That’s why I wanted to subtly subvert the tale based on a pun: weather and time are the same word in French. So I asked for a dress the color of time, which I thought would be much more interesting and challenging. Unfortunately Anako really wanted to do a weather dress and she got the last word. The result is very pretty…however this is my least favourite dress because of that missed opportunity. In the end, it doesn’t really change a lot for the player so I bet you didn’t really notice the discrepancy X’D. 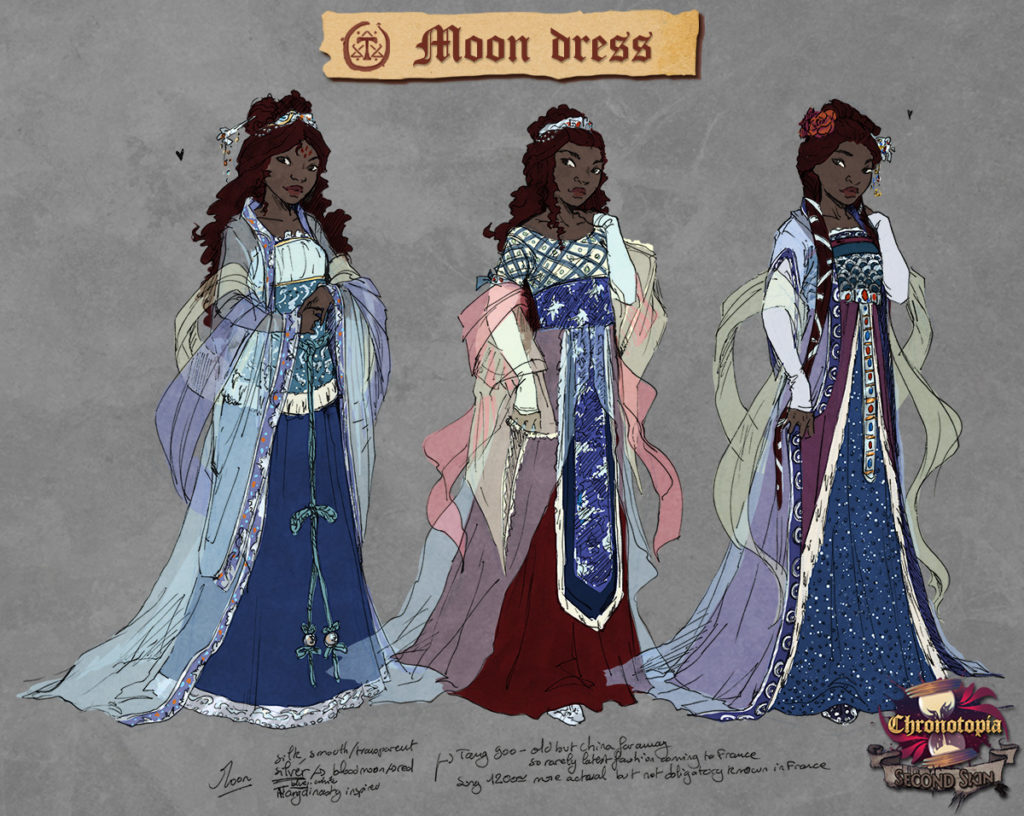 The moon dress is the most incredible one, no question!

The second one, the dress the color of the moon, is probably the one I like the most though. Anako’s idea was to mix French medieval fashion with other countries’ fashion to create unique and mystical outfits. If the previous dress was European in design, this one takes inspiration from China. She did tons of research on the different dynasties of that time to find the right feeling, with transparent veils being associated with the moon. It was incredibly hard to choose one outfit as Kionna looks lovely in all of those and the result is breathtaking. Yet that little disagreement from earlier did have an impact on the moon dress too as I originally wanted to switch their colors and we ended up with two blue dresses instead. 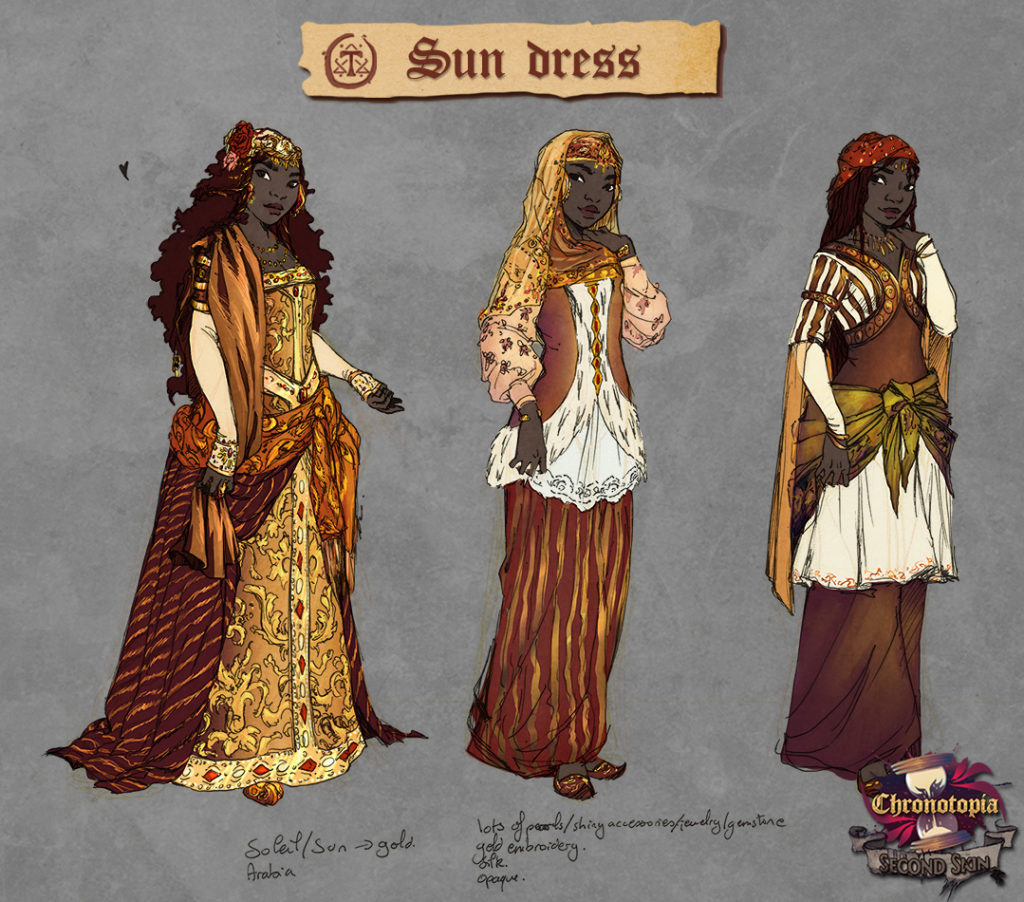 And finally, the third one, the dress the color of the sun, is the most dazzling of them all. In Perrault’s version it is implied that this is the nicest gown as it’s the one Donkeyskin wears when she first meets the prince. While the moon dress was inspired by China, this one is inspired by Arabia. This choice was more obvious because it was the most elegant combination, the one that looked most regal to me. And I think it’s interesting how Anako managed to find the right balance between westernizing the outfit and keeping the original foreign influence.

In a way, this article perfectly reflects the strengths and weaknesses of Donkeyskin over a similar fairytale like Cinderella. The incest part is creepy, which tend to scare off people, but I decided to lean into it by making the king the abusive jerk he always was. And instead of one pretty but vague dress for the ball, you get three thematical ones that look almost magical!

One more reason to give Donkeyskin a try~