No more goofing around, today is serious business! Last time, I talked in more detail about Nahima’s character so it would only be right to finally address her counterpart and the second romance option of the game: the Fairy.

Minor spoilers ahead: the theme of the Fairy’s route is revealed. 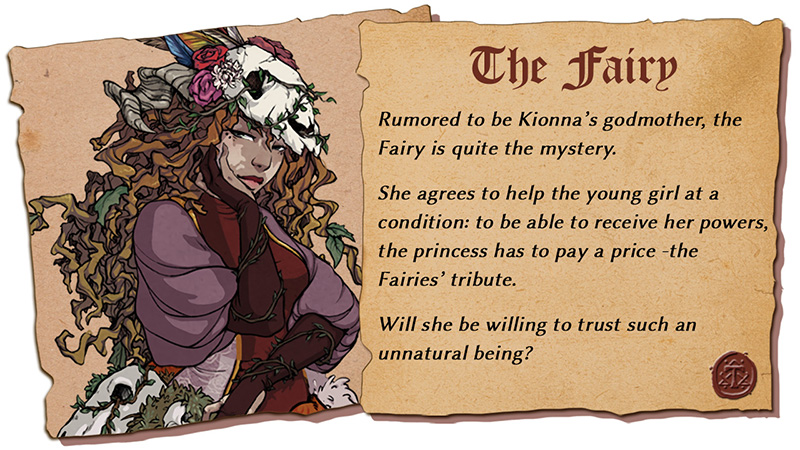 Donkeyskin being a fairly traditional tale, of course, I wouldn’t have missed the opportunity to create Kionna’s fairy godmother! Usually though, this type of character is used purely for convenience: fairy godmothers never have lives of their own to tend to, they’re always available for their protégée, their magic is unlimited and has no consequences or side effects whatsoever. And it has always bothered me. I didn’t want to take the easy way, I wanted Chronotopia’s magic to work in a similar fashion as what you can see in Madoka Magica: not only does using magic come with a price but it can also backfire like a devastating butterfly effect. Even if the price itself is more inspired by Mai Hime where all the female characters’ powers come from their love. 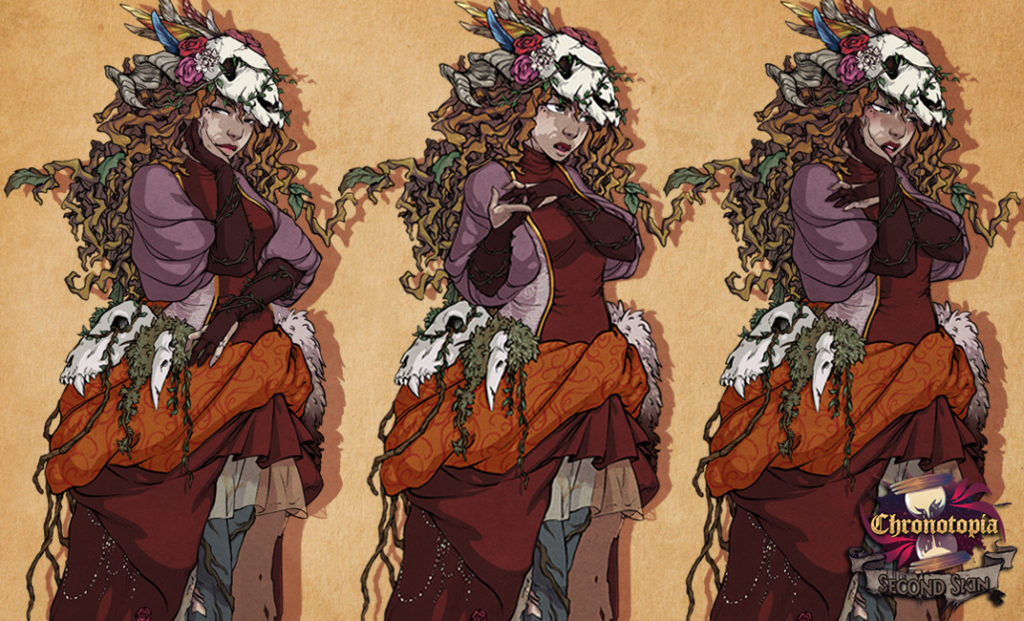 The Fairy’s in-game sprite, by Anako. She only has one outfit but what a presence!

Based on that concept, the Fairy had to reflect the ambiguity of her powers, being both an ally to the heroine and a disturbing character you’re not sure you can trust. That’s when I stumbled across one of Anako’s drawings and fell in love with it because I already knew that I wanted something similar for the design: a “witch-like” feeling. 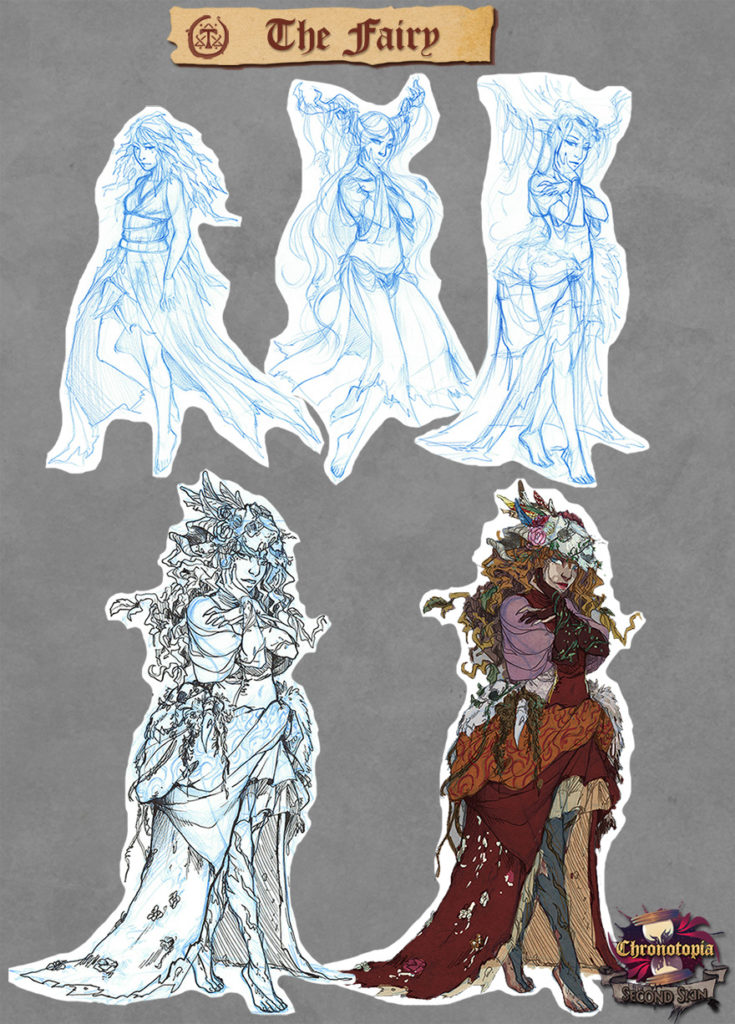 The Fairy’s concept art, by Anako. We rather quickly decided on this design.

Just like I had explained in the previous character spotlight, the godmother in Perrault’s tale is almost scatterbrained as she easily let the king foil her strategy (I’m pretty sure she was just improvising all along). So I tried to create a creature you could take seriously, a being fit to handle those otherwordly powers! And one way to do that was simply to draw out the wait before making the fairy appear for the first time, making her more mysterious and unapproachable than in the original. It also reinforced the fact that she has her own agenda: she accepts to help Kionna but makes it abundantly clear that she would rather be done quickly to do something else. She may be your godmother but you’d better not make her wait for too long! 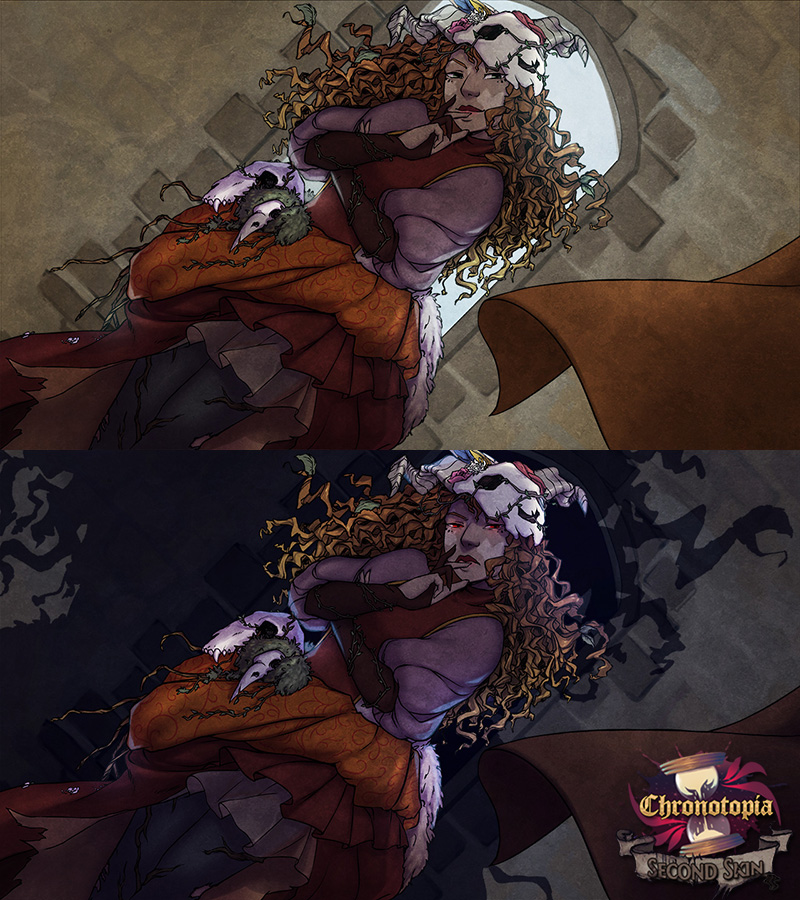 Another great CG Mae and Adirosa. Don’t you ever annoy the Fairy~

And since she’s meant as a contrast to Nahima, the Fairy represents the future, novelty, the unknown. She keeps pushing Kionna forward and making her question the world around her and her own desires. Besides, there’s something intoxicating in seeing her perform magic and handling that incredible knowledge. Who wouldn’t want to learn more in Kionna’s place? There’s just one little detail: since she’s not human, the Fairy also embodies danger. She could crush you in the blink of an eye should you decide to piss her off (probably not a good idea). And it’s hard to know how much you can actually trust her. Is she really on your side? Or is she up to no good?

If choosing Nahima is the easy and expected outcome, choosing the Fairy is equivalent to a leap into the unknown. Are you willing to dispose of your own humanity just to get a glimpse of her world? If you are, there’s no coming back!