(We’re funded at 75% and Chronotopia has been greenlit! There’s only 3 days to raise funds and make this project a reality so it’s now or never to support us!)

After PyriteKite/Kat, it’s Anako‘s turn to talk about her work. And she has quite a lot since she’s doing both the sprites and the event CG! I highly suggest checking out her DeviantArt account or following her on Facebook/Tumblr because she posts very pretty things~

Helia has already tackled the subject earlier by talking about creating the characters. That was the written part but, of course, there’s also the visual part. I was contacted firstly because of my drawings but also because I like fairytales. However, one of the main constraints of the project was that I had to stay “realistic” in my approach when it came to clothes. So no dress the color of time with clouds or fantastic details.

First of all, before even sketching, I ask Helia to make a more or less succinct description of the character. It can be related to their stature just as well as their ethnicity, the type of face they have, the type of impression the characters have to convey or their personality. Knowing if they’re rather jovial or sullen, likeable or on the contrary scheming, all of that helps me getting to know the characters better and giving life to them in my head in order to find the pose that will best highlight those features.

Once those information are gathered, I can finally start my researches. For Nahima and Kionna, since they’re Moor, I also had to make researches so that there would be both a certain likeness to their faces and clear variations. I usually begin the first drafts of the characters while I’m looking for references. Naked first, then I work around their appearance and their pose. Sometimes, it comes to me quite fast (like with Nahima), sometimes it takes more time (like with Kionna or the Fairy). On occasion, I also make sketches for the expressions (I did it for Lys for example) but it’s not always the case. 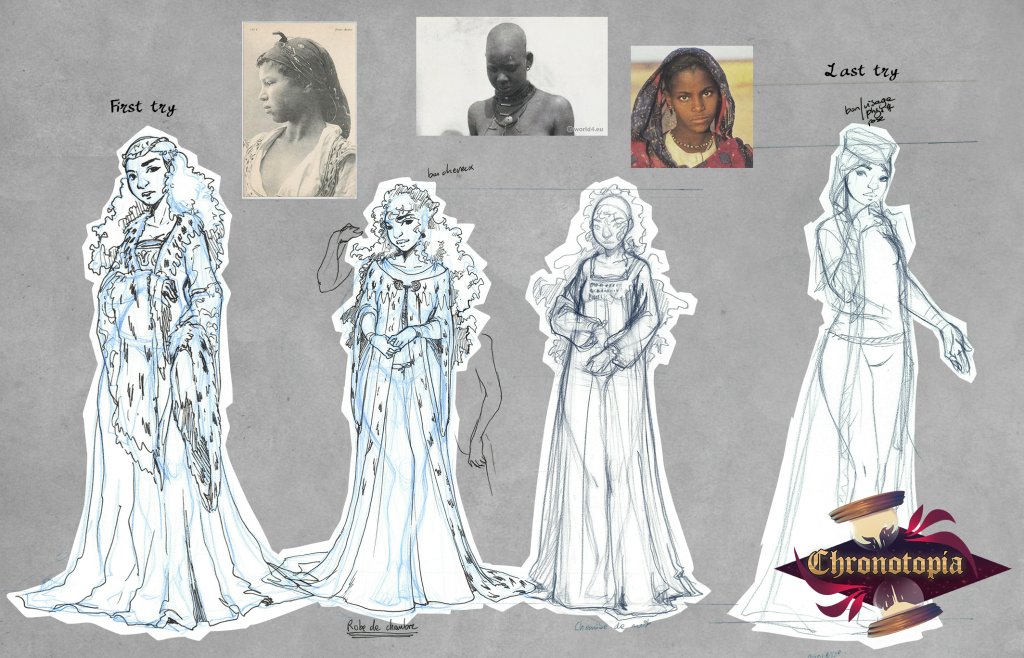 Once I’ve found the pose and the appearance (usually with some drafts of the outfit), I can start researching the clothes based on the sketch (mostly done analogically). For the three dresses, it turned out to be a little more complex since I wasn’t only asked to portray an era but also a theme (for example the moon).

To help me dealing with those themes, I decided to mix the French fashion of the XIIth century with the fashion of other countries by putting myself in the place of a tailor from that time who would want to create spectacular and mystical outfits. For the dress the color of the moon, my inspiration was China in particular because of the transparent veils that I associate with the moon and the night. However, although the corresponding era was the Song dynasty, it occurred to me that it would be more coherent for a French tailor of the Middle Ages to be influenced by a previous dynasty (through word of mouth, paintings brought back from the East and some fabric related to the silk road). That’s why I chose the Tang dynasty.

The most difficult aspect was to find an elegant combination, something that would look westernized without losing that Asian influence. Giving the impact of a magical dress, an exotic, almost esoteric one, to the people of that era. So they had to be envious of the outfit, to find it pretty and not bizarre. And the challenge was the same for all of the dresses. 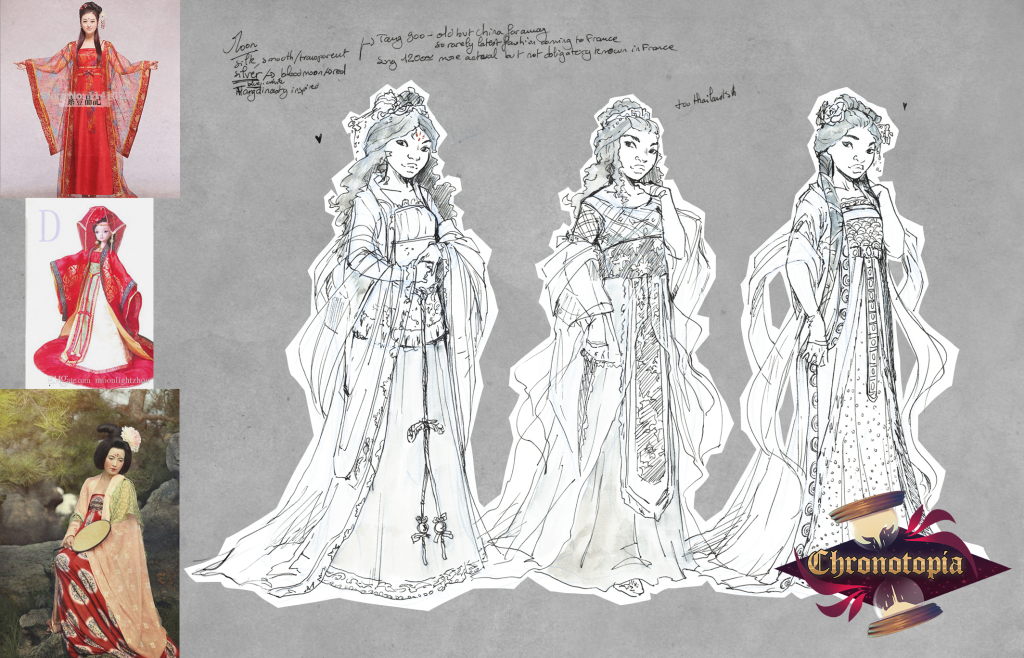 Once I have drawn the rough work, I always make one or more colors tests for each outfit in order to help Helia in her choice and to visualize better the idea associated to each (and, if necessary, make some alterations). For the dress the color of the moo, I already had a main idea: veils, to add transparency, silver tones and blue as the main color (since it’s the most expensive and rare one at that time). I always put a little symbol next to each outfit (see the color test below) to indicate to Helia what my favorites are; it sometimes helped us choose between two dresses. 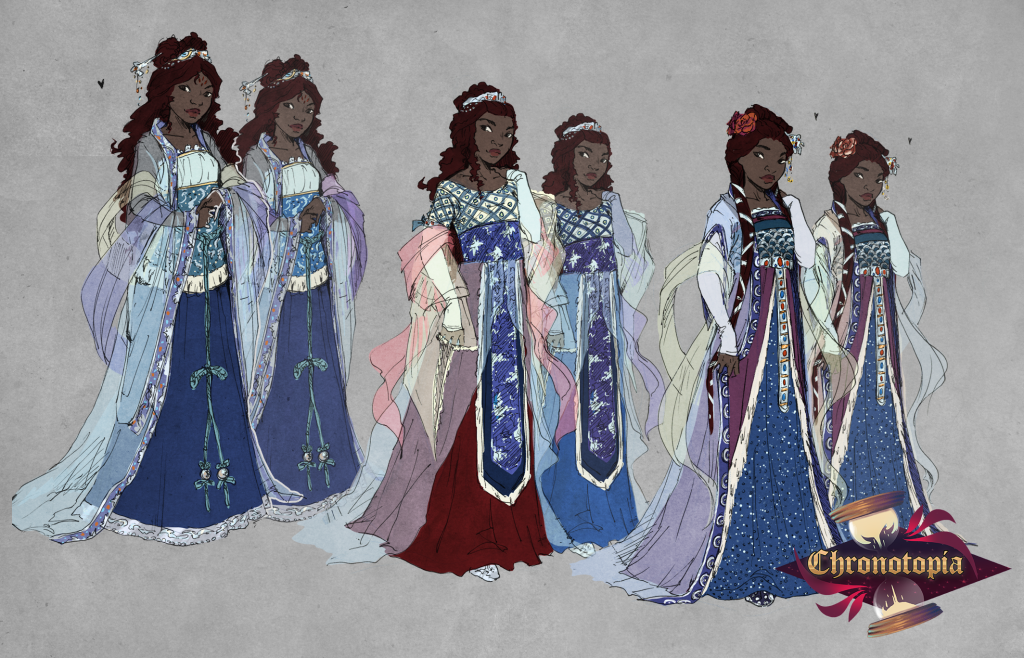 Color researches for each dress and tests

Starting from there I’m kinda in freewheel mode because everything left is only execution. I often realize at that point that I have not been precise enough on such and such detail, which makes me lose time because I have to do it all over again or even guess how to do the detail.

My layers being split between the arms and the rest of the body, I ink the latter then put the flat colors before tackling the arms in the same order. I only work on the shades when everything else has been properly done and in the same order. It allows me to notice possible mistakes and to be able to modify some parts of the base when I have to play with the projected shadow of the arms on the chest. 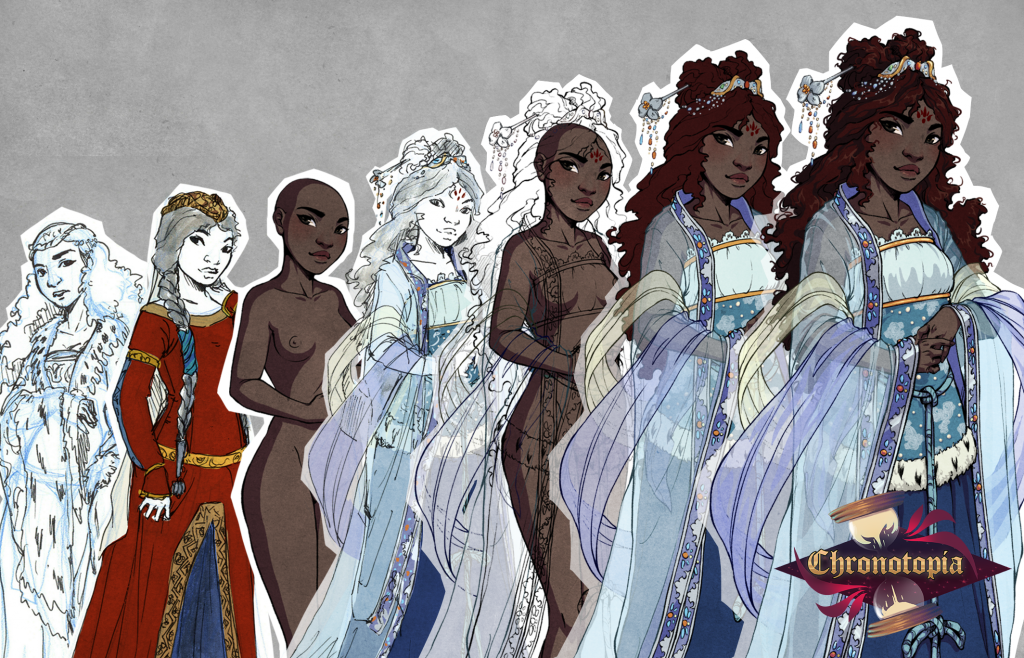 I only work on the expressions when I’m finished with the rest of the sprite. It allows me to draw the open jaw at the same time and prepare the areas that have to be hidden by the hair, the hand or a small accessory. Which can lead to duplicating the file if that element is mobile. The expressions turned out to be quite a problem in Kionna’s case since she has many hairstyles and, most importantly, the head of the donkeyskin. 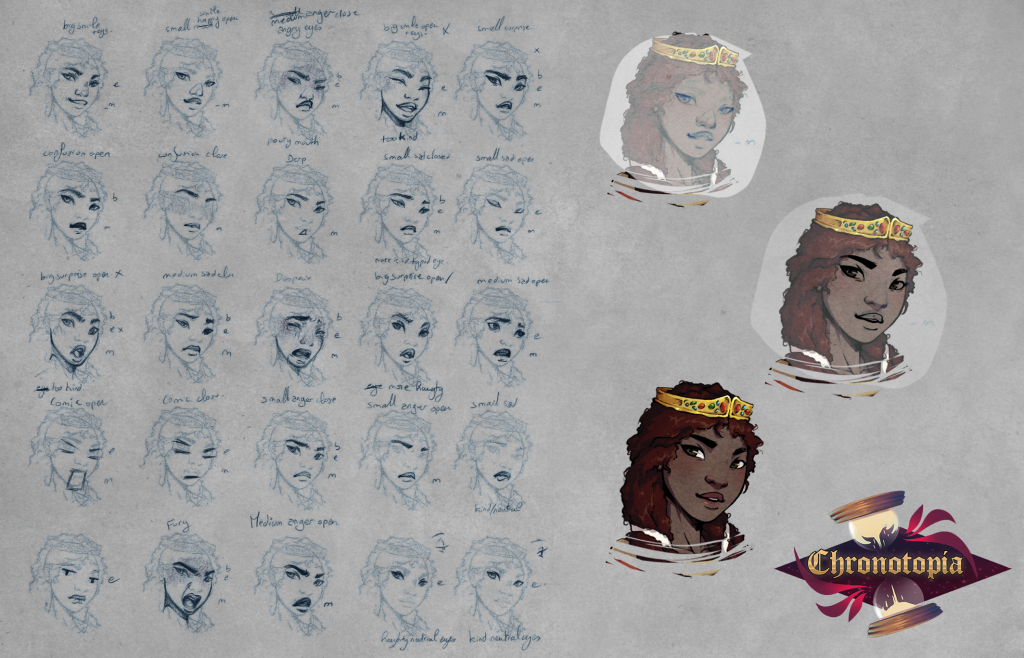 Sketches of the expressions and the different steps in making them

That was Anako’s insight on making sprites/characters. I hope you learned a lot and that you want to see more ;). 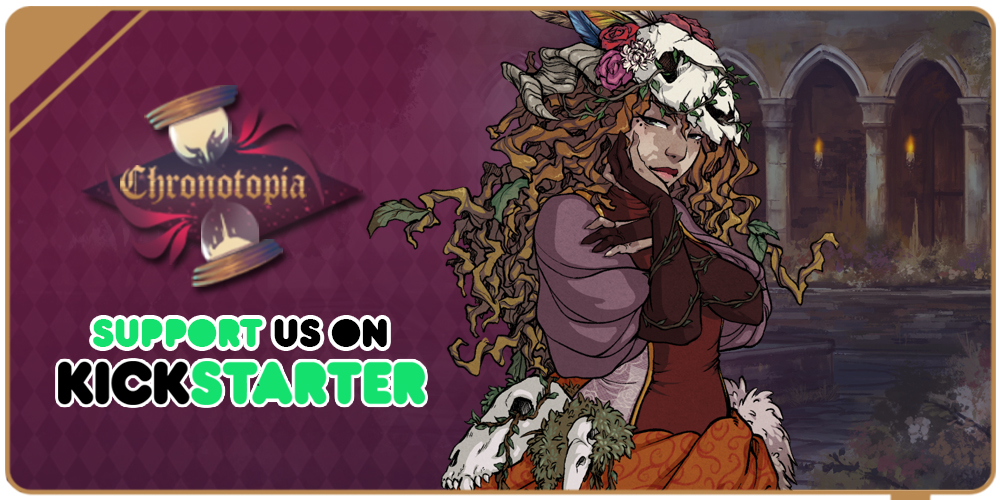 Since there’s only a few hours left to the campaign, I don’t think we’ll be able to post another article on time but I hope you enjoyed this little series =).