Last time I talked about how I came with Chronotopia’s concept, this time I will explain how I selected Donkeyskin as the fairytale I was going to rewrite.

Beware, it is strongly advised that you’ve played the demo beforehand not to spoil the surprise and to understand better what follows. If it’s not the case yet, I warmly recommend that you go take a look!

Donkeyskin: the junction of many variations

Once Chronotopia’s concept was found, I had to choose a fairytale to rewrite and most importantly, what I was going to do with it. To do that, I put my book’s collection into good use and read again one that I especially like which is a compilation of all the many folkloric and literary variations of Perrault’s tales. Since it’s such a shame that so few people know those variations, I really wanted to explore them…at the same time. So I quickly came with the idea of a heroine who would go back in time and each of her adventures would be a loop illustrating a lesser-known version of a tale. My choice settled on Donkeyskin because it was the one that had the most interesting variations. Plus, it allowed me to easily pick up elements from other tales that are similar: Cinderella, Griselidis, Sleeping Beauty, the Fairies, as well as some old stories from Chrétien de Troyes. 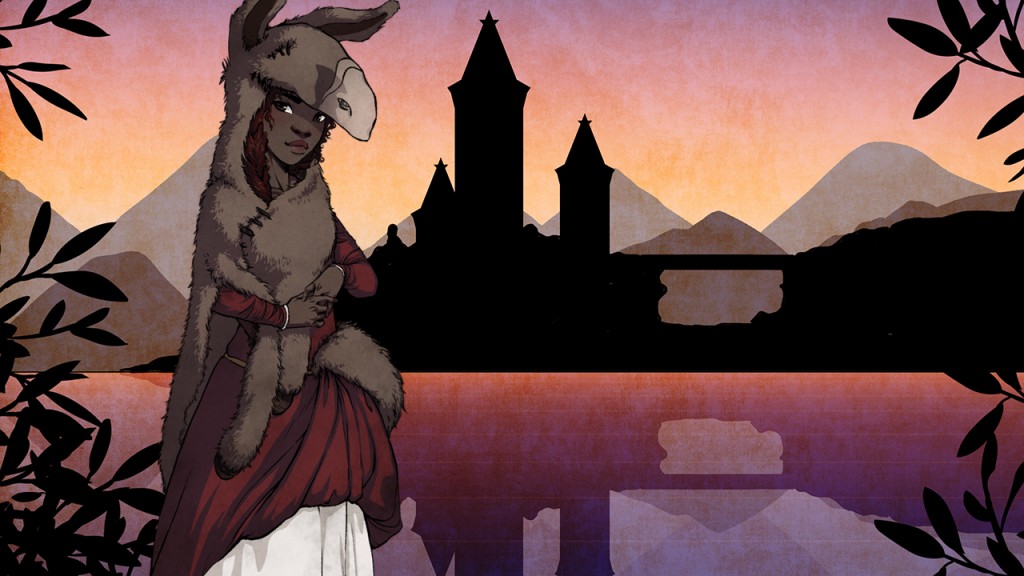 You don’t see it yet but the donkeyskin will be here!

So Chronotopia is a tribute to all those forgotten fairytales with my own personal touch and I think fans like me will appreciate the various references!

After the concept and the plot, I had to think about the characters, starting with the princess. In Perrault’s version, as in the French film adaptation from 1970, the king decides to get married to his own daughter under the frivolous pretext that she’s the only one who’s prettier than the dead queen. I have always found that ridiculous: a noble as rich as him can afford to send messengers all over Europe. Don’t tell me his standards are so high no princess across the whole continent can satisfy him! So I worked on the basis that more than anything he wanted a wife who looked like the previous one, which would explain why he was so quick to jump in the incest wagon. 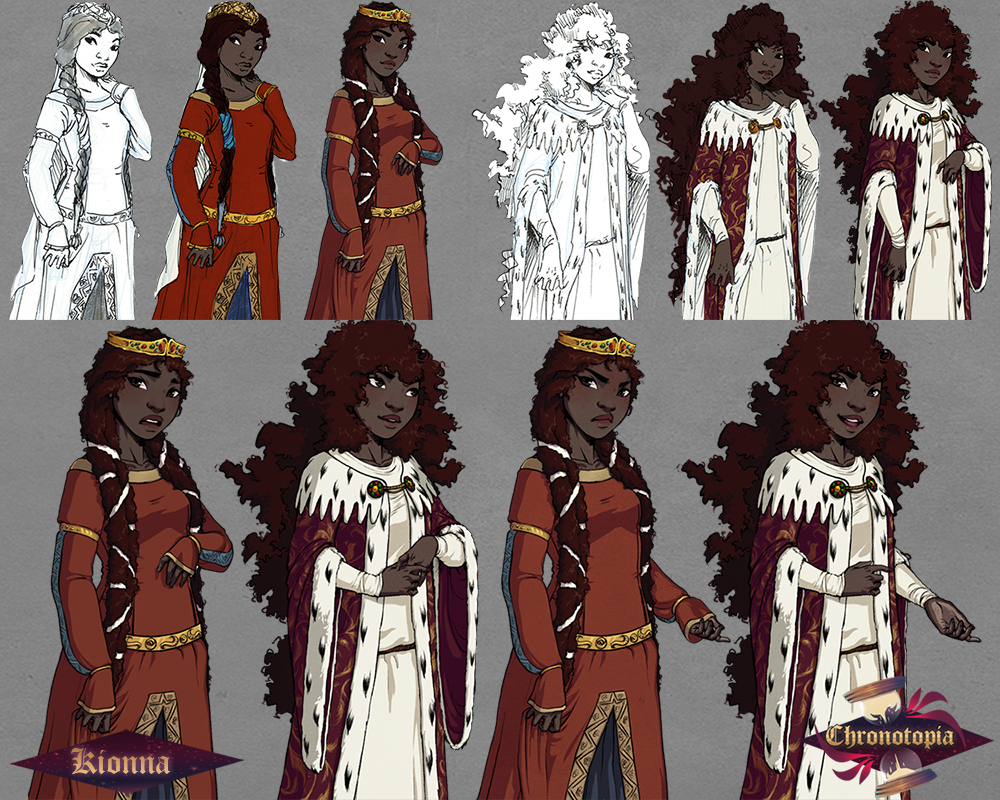 But there was still something off. There had to be a princess somewhere in Europe, be it Spain or Russia, who could be suitable. Changing the skin tone of the queen seemed obvious to me: there had always been people of color in the Middle Ages’ society but noble did care about their estates and arranged marriages so people of color with a lot of power would be way less common. If the queen was black, her daughter would be too, which explained why the king had a hard time remarrying. 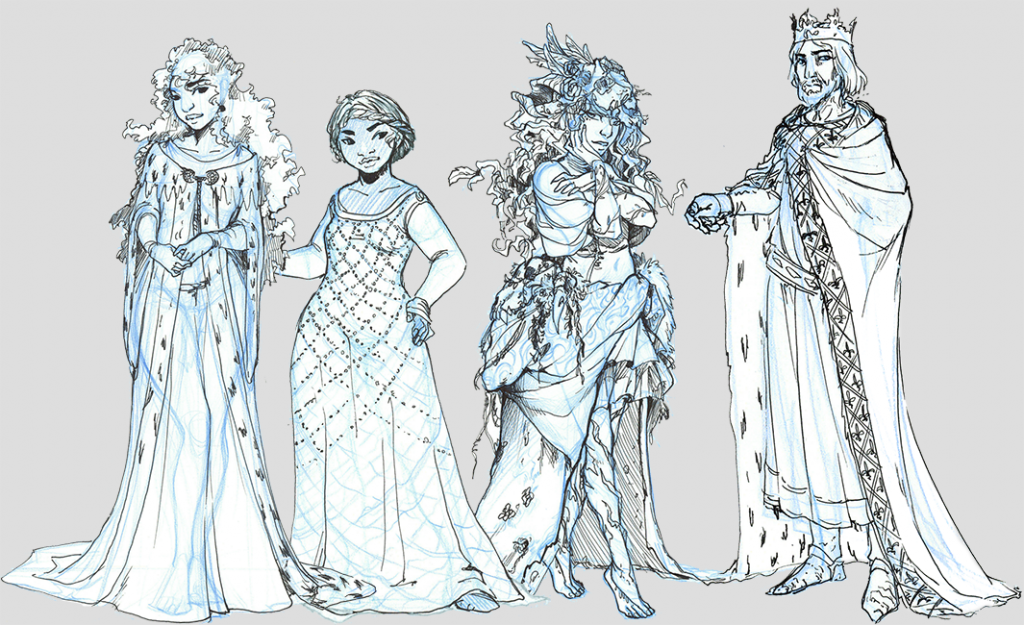 Sketches of the different haracters by Anako

Choosing a black princess has another advantage: it offers a design that’s out of the ordinary. Let’s face it, Disney has been here, so we’ve seen every possible variation of a white princess already (blond, dark-haired, red-haired, and so on). And I want my character to be easily identifiable at first glance. The solution seemed perfect to me in every way: story-wise, design-wise and as a way to offer more diversity. That’s why Donkeyskin became Kionna, the only heiress of a great mixed queen (also a way to justify the downfall of the kingdom and give a motivation to the heroine).

The making of the fairy

Since Chronotopia’s purpose remains that Kionna goes back in time and learns to become a better person along the way, there had to be some magic at work. In traditional fairytales, the godmother is a character which is only used as a deus ex machine: she never has her own life, her magic is unlimited and have no consequences or side effects. And I’ve always found that too convenient. So I wanted Chronotopia’s magic to work in a similar fashion than what you can see in Madoka Magica: not only does using magic come with a price but it can also backfire like a devastating butterfly effect. Even if the price itself is rather inspired by Mai Hime where all the female characters’ powers come from their love. 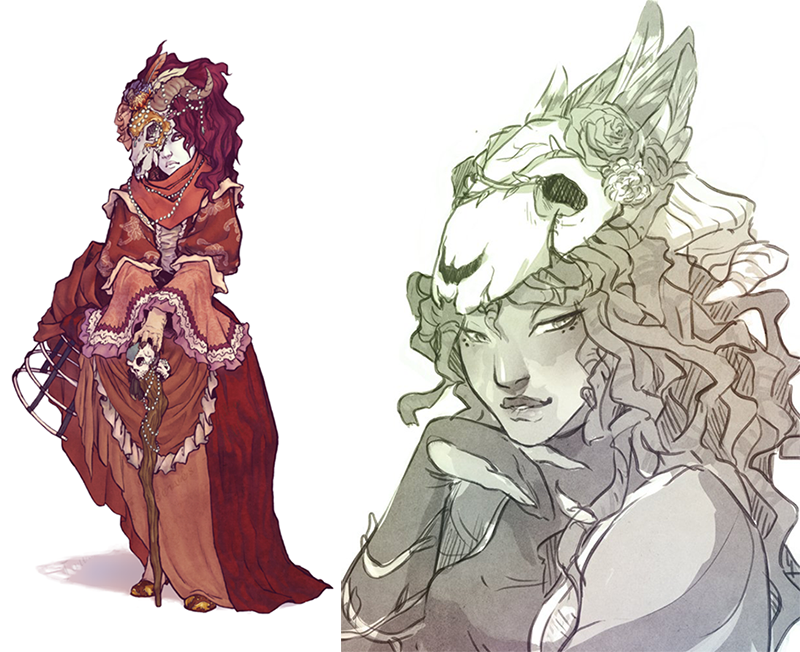 Based on that concept, the Fairy had to reflect the ambiguity of her powers, being both an ally to the heroine and a disturbing character you would not trust. Luckily, I had stumbled across some of Anako’s drawings and I already knew that I wanted something similar for the design (a “witch-like” feeling).

There were still things I had to make clear. In Perrault’s version, the fairy is the one giving very bad advices to Donkeyskin when she suggests she should ask for the magical dresses, then the infamous skin. And it didn’t quite fit with an ancient being with god-like powers! That’s why I created Nahima as a “temporary godmother”: she’s only trying to help her friend with her limited understanding of the world which makes the failing of her strategy way more believable and allowed me to draw out the wait around the fairy, making her more mysterious and unapproachable. 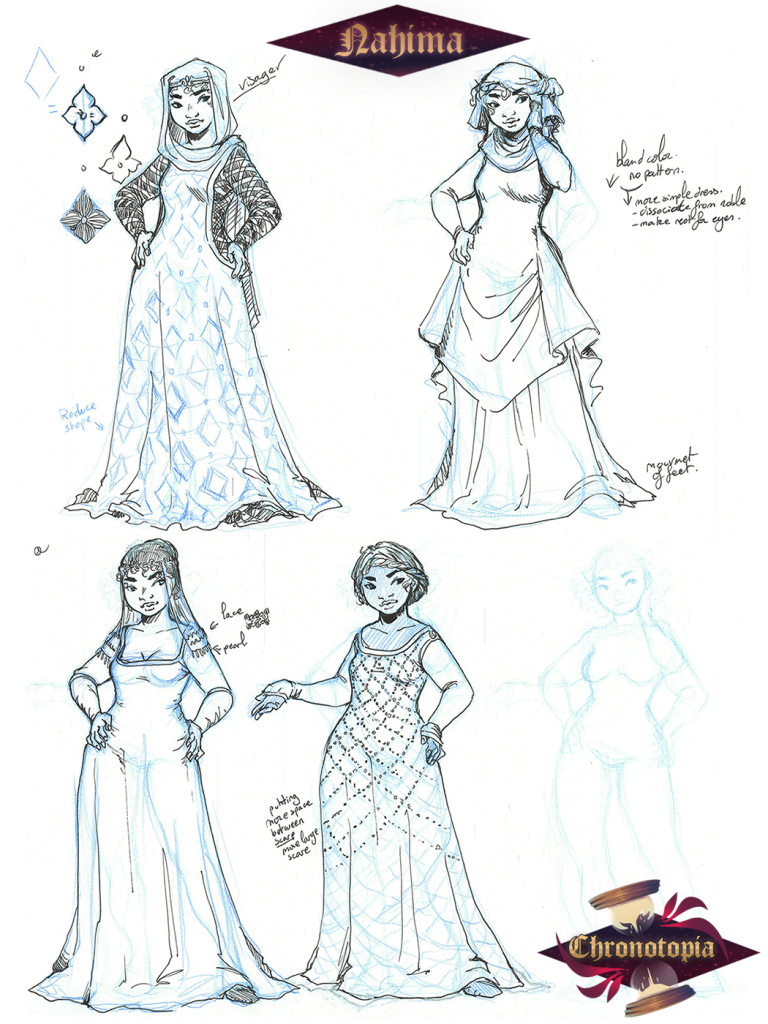 Some tests Anako made for Nahima’s outfit

I think Nahima goes well with the rest of the medieval setting and she makes Kionna’s exile more painful because she has someone/something to leave. And since the fairy only appears late in the demo, she has her own agenda: she accepts to help Kionna but make it very clear that she would rather be done quickly with everything to do something else…namely sleeping. Isn’t that the best reason XD? 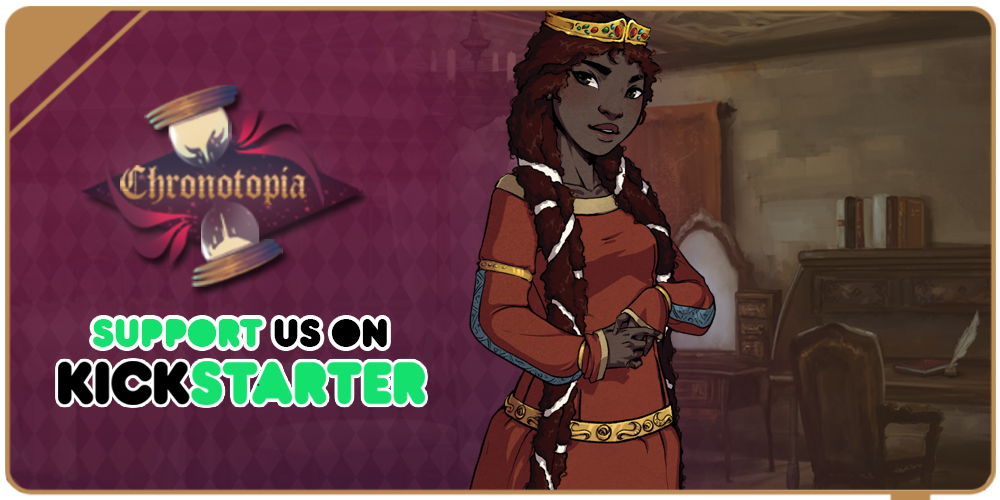 Well, that was the creation of Chronotopia, its story and characters. I hope you liked that! Don’t forget that Chronotopia is on Kickstarter and still needs your support ;).

2 commentaires sur “The creation of Chronotopia: the characters”