I’ve talked a bit about it to the people I had the chance to meet at Japan Expo but here’s a more formal announcement: the Träumendes Mädchen team will most likely not entering Ludum Dare again, nor similar game jam. Here’s why.

This picture makes a good header!

Searching and finding yourself

To those who didn’t know it yet, a game jam is a gathering where devs try to make a gae frm scratch in record time. This type of contest  is now super popular and there’s more and more game jam organized each year, so much that it can be really confusing sometimes. The main appeal of a game jam is that it’s a really favourable setting for creation. There are various scenarios:

For a long, long time, our team did match with one of these scenarios : thus Being Beauteous had a symbolic meaning because it was our first finished project, and our following games were all ideas I wanted to try out. But it’s not really the case now. It’s important to experiment things in order to find your identity but I think I’m slowly coming to find and answer and game jams don’t really help me anymore. Well, it’s a reason but not the most important one. 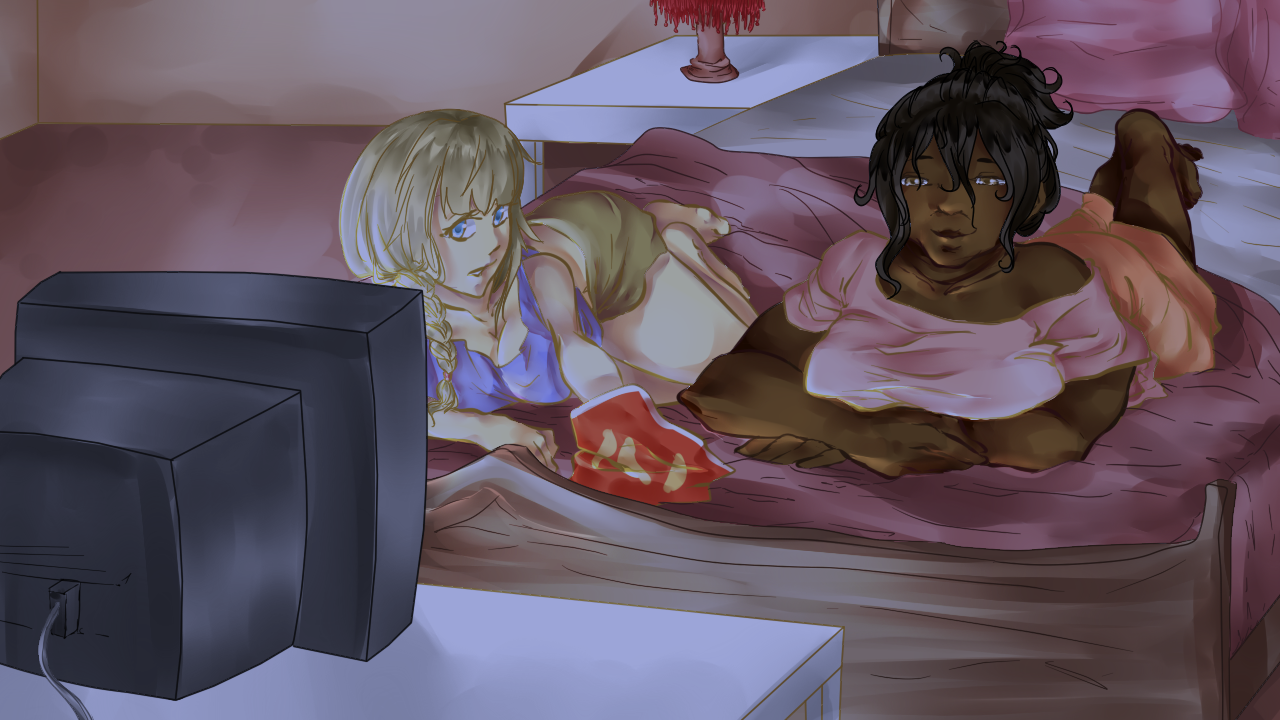 Eleesha After Story scene, only available on the hard copy of Wounded by Words ~

The Novel and The Game

What really justify my choice is the conditions around Ludum Dare and some other game jam: they’re not adapted to story-focused games. At all. For a start, because if the length of the contest.

You asked for a challenge?

People tend to forget it but a visual novel needs a lot of time to be made. With the reflexion needed to write a story, but also to make all the assets. Of course, a VN doesn’t ask as much time and skills in programmation as more classic games but, in return, the experience is incredibly static. The player cannot move freely, there’s no gameplay mechanic, only text to read with some illustrations that lightly change. And sometimes choices. So, the dev often has to multipy the number of illustrations (sprites expressions, backgrounds, event CG, light animations) to try to break this impression. A small VN that doesn’t need much assets (at random, taking place behind closed doors) is already asking a lot of illustrations. And they’re HD ones (you can’t cheat a little as with pixel art) ! Let’s say it’s a miracle we finished all our projects with a deadline that tight!

My head after a game jam, metaphor…

Besides, let’s not forget the key element of a visual novel is the story. Some kind of games can cheat,  gamble on the atmosphere or the gameplay, and it’s no big deal. As an interactive book, a visual novel just cannot give it a miss. Except that a story, even a really short one, can’t be written as fast as some might think. It depends on the author of course, but in my case I have a really slow maturation process. It can take me months to pile up elements before being able to mentally bring the puzzle together. Once the image is clear in my head, I can writte pretty fast. The problem is that game jam tend to bypass my maturation process since everything has to be done RIGHT NOW. I might have an idea but I don’t have the time to really develop it and I find myself having to make it before it’s even ready. You can see that with Garden of Oblivion since this game doesn’t really have a story. Since it’s an hybrid with point & click elements, it’s still possible to rely on the atmosphere but there’s no strong plot (even though it’s supposed to be my forte, or at lest my aspiration). It’s also the case with Wounded by Words. This game drove me into a corner: I spend a whole three days furiously writing. The idea in my head was incomplete, which put me in troubles several times. It might sound stupid to you, like a writer’s complain, but it’s really frustrating for me to be unable to be satisfied with my work.

At least I could practice to make exploration scenes!

Inspiration doesn’t come to you that easily

Beyond the deadline, what’s really discouraging me with Ludum Dare now is the theme. During each edition, the participants make suggestions and vote for their favourite. After rounds of voting, the officiel theme is announced and open the contest. However, this theme is almost never adapted to the making of a story-centric game. Most of the time, the theme is suggesting a gameplay mechanic. Unconventional Weapon, the latest, inspired devs to make funny games with the most over the top weapon conceivable. Entire Game on One Screen, the previous one, was encouraging devs to use wisely the background limitations. Connected Worlds did let a little more freedom to devs but it was still stronly pointing at the gameplay possibilities around “links”. I stop here, I think you got what I’m trying to say. It’s difficult to think of a plot with so little food for thought… 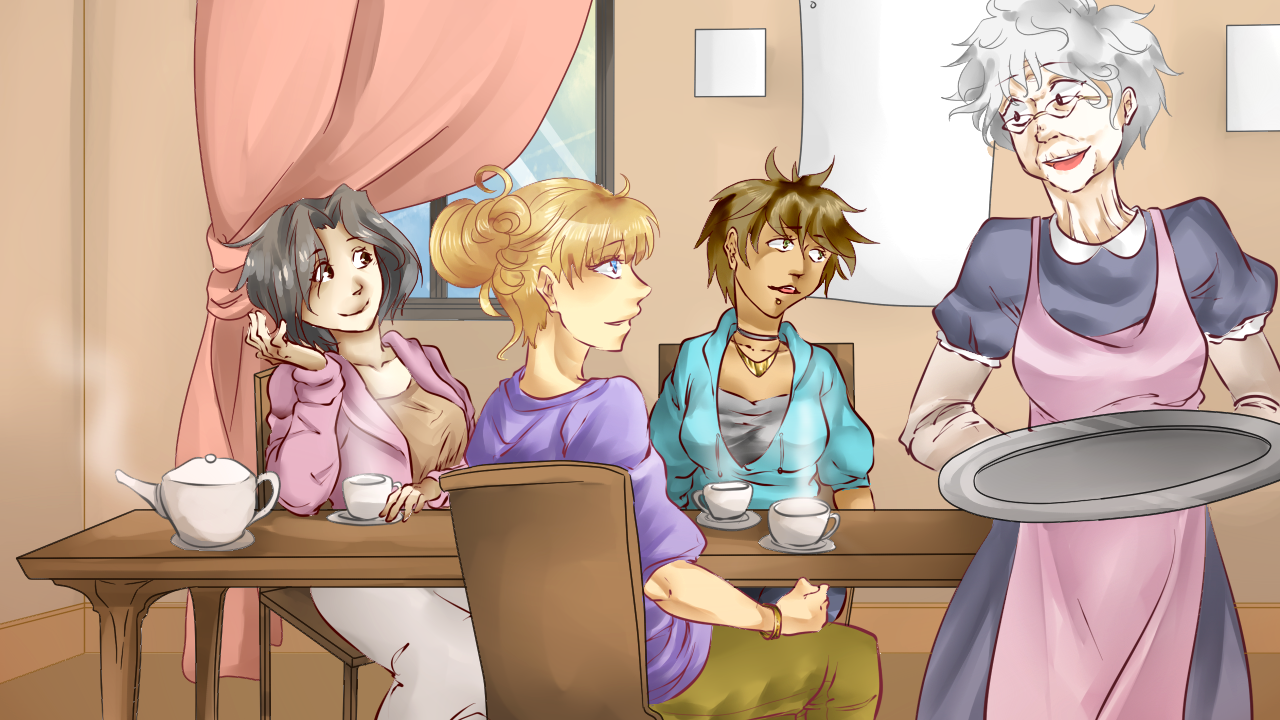 Yes, there are new characters in some After Story scenes~

« Real » games and the others

It’s even more difficult as the Ludum Dare community still struggle to open to novelty. Each and every time I voted on Twine or RenPy games, I came across THAT comment, the one that says “It’s not a real game, it sucks”. Might explain why so few women enter… And if you’re here to try to get some visibility, tough luck: there are big favourites who enter each time, and they kinda monopolize press coverage because journalist almost only bother to try their games. Not very interesting if you’re one of the others.

All these elements make so that I don’t see myself joining Ludum Dare or a similar game jam again:there are too many constraints and too little fun. Maybe it’s also that I don’t have anything to prove myself. Anyway, if I really have to do it again, it will be with good old Nanoreno (Lemmasoft’s contest) or with a game jam that is explicitely suited to story-focused games. Won’t be right way! Of course, I don’t prevent anyone from trying the experience, even though I’d still advice visual novel developpers to go with Nanoreno. The only problem is that there’s only one per year ;).