In the previous article I talked about fairytales, now it’s high time to introduce the main heroine: Princess Kionna. 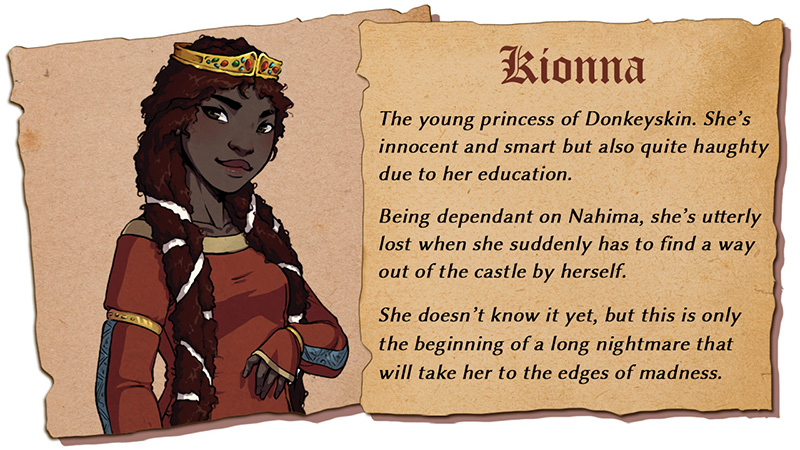 Naturally she’s the first character I came up with while drafting Chronotopia: Second Skin. But really it’s more of a tandem with her mother because her death is the major event that sets the story in motion. Many details bothered me in Perrault’s version of Donkeyskin, one of them being how the text subtly implies that the late queen is vain. But she is clearly an important character otherwise she wouldn’t have such an impact after her passing! So diminishing her didn’t strike me as a good idea, instead I wanted a strong ruler that would be badass and truly missed.

Kionna’s in-game sprite, by Anako. She has plenty of expressions, poses and outfits!

Another issue I had with the original tale is how quick the king is to marry his own daughter under the frivolous pretext that she’s the only one pretty enough to qualify. I have always found that ridiculous: don’t tell me his standards are so high no princess across the whole continent can satisfy him! So I worked on the basis that more than anything he wanted a wife who looked like the previous one. But there was still something off. Changing the skin tone of the queen then seemed obvious: there had always been people of color in the Middle Ages’ society but nobles did care about their estates and arranged marriages so people of color with a lot of power would be way less common in France. If the queen was black, her daughter would be too, which would somewhat explain why the king had a hard time remarrying. 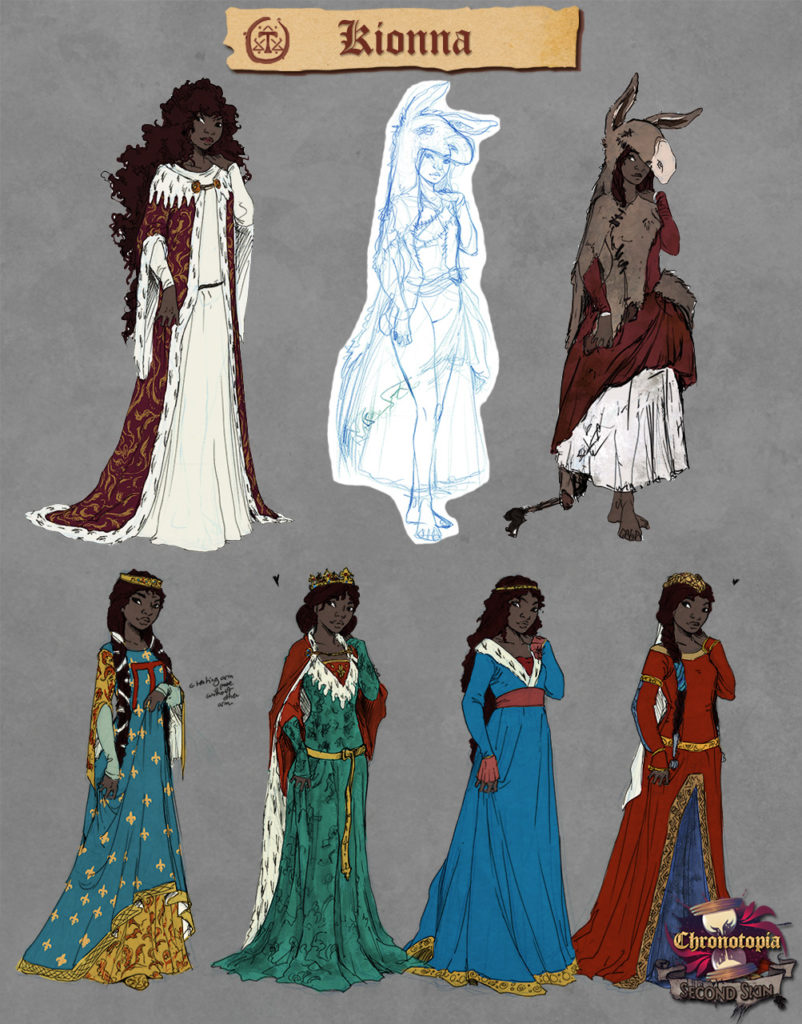 Choosing Kionna’s dress was especially difficult as Anako made so many great propositions! N°2 ended up becoming the mother’s design.

Choosing a black princess has another advantage: it offers a design that’s out of the ordinary. Let’s face it: Disney has been here so we’ve seen every possible variation of a white princess already (blond, dark-haired, red-haired, and so on). And I want my character to be easily identifiable at first glance. The solution seemed perfect to me in every way: story-wise, design-wise, and as a way to offer more diversity.

And what a journey Kionna will have to go through~

And that’s how Kionna came to be! She’s princess-y to a fault: haughty, naive, oblivious to the working of the world. But as the only heiress of a great mixed queen, she also have to carry a huge burden as she’s expected to do as well as her mother and still doesn’t really know what she wants. This is both a good way to justify the downfall of the kingdom and to give a motivation to the heroine. That’s also why it’s hard to describe Kionna as she hasn’t fully grown into an adult yet and can change drastically depending on what she experiences. In some routes she can be sweet and caring, in other cruel and paranoïd, sometimes both at the same time. Her journey is what’s going to shape her personallity and, boy, she’d better be prepared for the worst !

What does fate have in store for poor Kionna? Death? Suffering? Betrayal? Friendship? Romance? Maybe a little bit of everything~